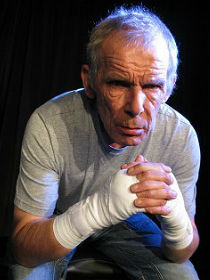 Everyone is afraid. When Ray (Christopher Fairbank) walks into view, he doesn't hurry. He sits, opens his bag, carefully takes out its contents and arranges them on the floor, taking his time to lay them out just so. Then when he finally speaks to the camera, he's just as calm and controlled. You wouldn't guess that he's capable of being scared of anything, particularly when you learn his record for knockouts in the ring, but Ray more than anyone truly knows what fear is. After being estranged from his only son for many years, he's come to acknowledge that underneath his veneer of tranquility, he's terrified of not getting a chance to put things right.

The unnaturalistic language is incredibly elegant, with the boxing coach telling the camera about "his kids" and how he's taught them the basic rules of the sport and transformed them from angry out-of-control youths into "pharaohs" who can "fly". Geoff Thompson writes beautifully and, having been a boxing instructor himself, he uses Ray to convey a genuine passion for the sport and how it can give people a sense of purpose. There's a hauntingly poignant link between Ray's storytelling and the Egyptian references littered throughout the dialogue, none of which becoming really apparent until the conclusion. The coach refers to all the greats - Muhammad Ali, Mike Tyson - almost hiding behind big names before he gets to the most important one, a person few will have heard of.

Although The Pyramid Texts makes for a wonderfully moving one-man show, there's a slightly longer film adaptation which has just been shown as part of the Edinburgh International Film Festival. The play's director Michael Vale keeps the stage version simple and minimalist. There's a punchbag suspended from the ceiling, with the sounds of boxers sparring playing in the background. Ray's video testimony feels like a confession, filmed in a relatively quiet corner of the boxing club which means so much to him. As he directs his testimony to the camera, we're not there, and it's this voyeuristic quality that makes the production. We're intruding on something so very personal and sacred. This is amplified by the spotlight, making the space smaller and more intimate with the stark lighting adding a certain solemnity to Ray's project.

Fairbank admittedly has a gift of a monologue to deliver, but he more than does it justice in a captivating performance from start to finish. His words are so melodious and calming yet as his character finally starts talking about his son, Fairbank's misty eyes betray Ray's unshakeable exterior. This isn't a hot-headed fighter you could provoke into a bar brawl; he talks of "honour" and being "professional". He's not completely zen though, he is capable of feeling and we do catch a glimpse of the painful extent to which he's hurting on the inside. Knowing how rarely he shows emotion makes this revelation feel even more powerful.

There are a few parts where the writing loses momentum slightly, with Ray taking a few detours as he prepares himself for his final heartbreaking truth. Yet overall The Pyramid Texts is a gorgeous piece of writing, executed for the stage with style and all the respect it deserves.